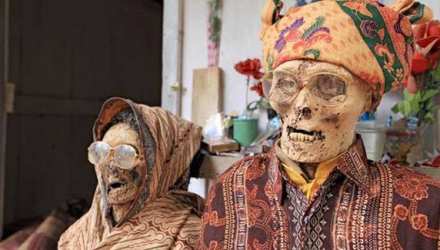 Foreigners recognize Ma’nene Ritual as the creepiest tradition in the world. They say it is an interaction to the zombies. Well, Indonesia should be proud of it. This unique ritual belongs to Tana Toraja Tribe in South Sulawesi Province. What is it, actually? The family of the death may take out the corpses and put new clothes on them. Due to a unique burial procession, the corpses remain in a good condition. They can even last for more than a hundred years.

The Nuance
Most of the time, Ma’nene Ritual is conducted in Lembang Paton Village. It is in Sariale District. The location is about 29 km from Rantepao. Once you reach the village, you can feel a traditional atmosphere. If you come at the right time, you can witness such ritual. It is conducted in the house of the death. For the villagers, it is a common sight. They aren’t afraid at all with it. Only the family members of the death are allowed to put clothes on these corpses, though.

Exploring Ma’nene Ritual
The ritual of Ma’nene is conducted once every three years. For some reason, it is quite interesting. Many foreigners are attracted to it. It is because they want to witness such creepy ritual directly. In a nutshell, Ma’nene is done by replacing the old clothes of the dead by the family or relatives. The type of clothes varies, though. It depends on the preferences of the family. During the procession, the tourists are allowed to take pictures by the consent of the villagers.

One of the phases in Ma’nene Ritual is the praying. Only the leaders of the tribe or Ne’ Tomina Lumba are allowed to do so. They use local language to give a prayer. Also, it must be done before the removal of the corpse. Next thing to do is to clean the corpse using a brush and other tools. Once the cleaning process is done, it is time to put clothes on the corpse. In this phase, only relatives are allowed to do it. The last thing to do is to put back the corpse in the coffin.

During the ritual, some men make a circle and sing a folk song. They also perform a traditional dance, which symbolizes the grief. This whole performance has the purpose of entertaining the families and relatives of the dead. At least, it puts them in a good mood when conducting the ritual. Overall, this traditional ritual of Tana Toraja is quite interesting. Today, it has become a unique entertainment for tourists.

How to Get There
From Jakarta, you can take an airplane to Makassar City. The destination is Sultan Hasanuddin International Airport. From there, take the local transportation service to Tana Toraja Regency. The trip usually takes about 7-8 hours and the distance is 339 km. It can be either longer than that, though. For a faster trip, take Poros Barru – Makassar Street. From Tana Toraja, your next destination will be Sariale District and Lembang Paton Village.