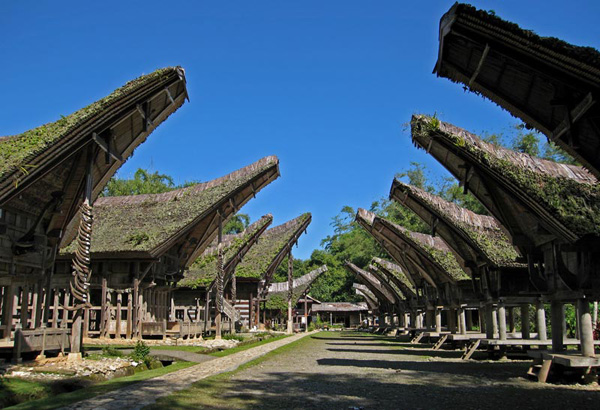 Pallawa Village is part of the history of South Sulawesi Province. The local legend has attracted visitors to come to this settlement. The village is also popular due to its Tongkonan (traditional house). Where is it? The location is in Sesean District. The distance is 12 km from Rantepao. Once you reach the location, you can see many traditional houses. In fact, the number is greater than that of the Kete Kesu’s. Not to mention it is older. The thing is it doesn’t as popular as Kete Kesu because of its poor location.

The Nuance
As mentioned earlier, Pallawa Village consists of many traditional houses (Tongkonan). They come in majestic and historical appearance. Some local kids are often seen on the path between those houses. In the back, there is a small forest. That means you may expect many trees, as well. Just like other villages in Tana Toraja, you can find uncommon burial sites near to the settlement. However, the distance is 1 km from the village. Thus, it requires a small trip to reach the location.

Exploring Pallawa Village
Just like other villages in Tana Toraja Regency, Pallawa represents how the local lives. It is a suitable vacation destination for those who love history and culture. It is because the village holds an interesting story. Some villagers may tell you about it, in fact. According to the history, there was a man named Tomadao coming from Sesean Mountain. He met a woman named Tallo Mangka Kalena. They decided to get married and lived in the east part of Pallawa. From their marriage, they got a son named Datu Muane. Later, Datu married Lai Rangri and created a new settlement called Pallawa.

Today, Pallawa Village has attracted many visitors. The settlement has a unique characteristic, which is the Tongkonan. There are 11 of them. Not to mention there are 15 big granaries. The locals call them “alang”. In front of the houses, there are the horns of buffalos. In terms of shape, Tongkonan is similar to Padang’s traditional house. Some people say these two cultures are related to each other. No one can confirm it, though.

Due to its unspoiled culture and beauty, Pallawa Village is worth a visit. A formation of Tongkonan, the history, and a local culture become the major attractions of the village. Also, you should try their foods. For example, there is Pantollo’ Lendong. It is made of the meat of eel. Another famous food is Pa’piong. In fact, there are other options. What you need to do is to talk to the villagers and try their local foods.

How to Get There
A trip to Sesean District from Makassar City takes about 8 hours. The distance is 333 km. It is a long trip, indeed. Due to this reason, you must take advantage of a good transportation. Otherwise, it will be tiring and troublesome. Also, use the right route. It is Poros Barru – Makassar Street. If you are an outsider, the best transportation is an airplane. In this case, reach Hasanudding Airport first. Later, you may continue to reach Pallawa Village.