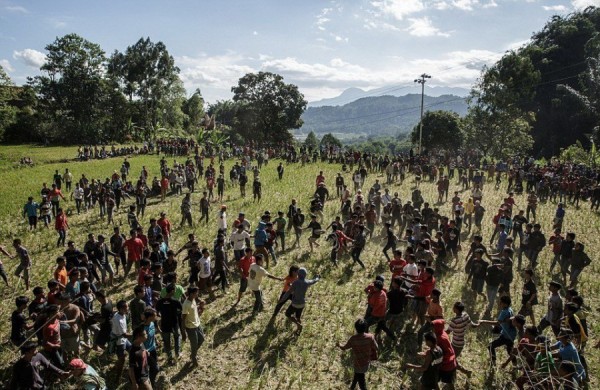 Tana Toraja is famous for its creepy burial tradition. Still, you can find other types of attractions. For instance, there is Sisemba. It is a cultural activity done by the locals. In fact, you won’t find it in other regions. A group of men gather in a field and fight each other. The thing is they are not allowed to use hands. They fight only using feet. In a nutshell, this tradition is similar to a fight club or group fight. Only the brave and tough men join this activity.

The Nuance
Sisemba Tradition is performed in a plain field. Usually, the villagers use unused farm fields to perform the fight. The fighters don’t use any protection gears, in fact. What they have are the gut and powerful kicks. There are some officials in the fields and they lead this fight professionally. The rest of the people in the field become the audience as they are watching the fight passionately. The best thing is everyone is allowed to watch this unique tradition.

Witnessing Sisemba Tradition
The fighting is a little bit brutal, but it seems interesting. The fighters only use their feet to attack each other. The best time to visit Tana Toraja Regency is after the harvest moon. The locals may perform such fight to commemorate the abundant crops. In a nutshell, it is an attraction of gratitude. Not to mention it opens for public. That means everyone is allowed to watch it including nearby villagers and tourists. Only the brave men join the fight, though. That means this attraction is considered rough and brutal.

The fighters don’t hold grudges, though. They perform it proudly as the people of Tana Toraja. The pain becomes the part of the culture, after all. It gives them and the audience a motivation to live well in the future. Before fighting, each group gathers in their spot. They may attack each other while holding hands with their team members. The attacks come alternately. The purpose of holding hands is to give a better damage in kicking the enemies.

The fight is done near to the farm. The fighters are surrounded by the audience. That means it is going to be a merry fight. The watchers cheer to these fighters, too. Moreover, there are no particular rules. That means the fighters are likely to get hurt. Despite the risk of injuries, these people are not allowed to hold a grudge or to hate each other. Somehow, this tradition strengthens the solidarity among villagers. It also helps the men to grow stronger over time, especially to work in the fields. For tourists, Sisemba Tradition becomes a unique attraction in Tana Toraja.

How to Get There
Sisemba Tradition is performed occasionally in some villages. Still, you must reach Tana Toraja Regency first. For those who come from Jakarta, your prime destination is Sultan Hasanuddin Airport in Makassar City. That means you need to take an airplane to reach such location. From there, take a local vehicle to reach a particular village in Tana Toraja Regency. The trip usually takes 8 hours. It is because the distance is 315 km.